It appears stating that people are in control of their own life and attitude is a most unpopular notion, but it is (in my humble opinion) not pointing fingers, rather empowering people to not be confined by excuses and take their lives into their own hands. Here's what I mean:

Yesterday I tweeted a most unpopular tweet, I said 'when we start taking responsibility for our own lives we realise how full of opportunity the world already is.'  Perhaps a platform of 140 characters was not the place to come forward with such a remark without context, it certainly created some tension.  Because of course without context people can interpret these words in one of two ways:  1, as it was meant) An inspiring pearl of wisdom that we are all in control of our own destiny NOT the sum of what people have done to us or that which ails us.  2) An accusatory remark telling people it is 'their own fault' they are where they are. Sadly some people interpreted it as the latter.

Bad things happen to good people, of course they do, there are atrocities and crimes, diseases and afflictions that are cruel, ravaging and disempowering.  Mental illness, rape, domestic abuse, sickness of a loved one for example. NONE of these are someone's FAULT.

BUT, and yes a most unpopular but by the look of it, once someone or something has robbed you of power, once you have been left devastated by being made a victim, the power is then yours once again to choose what to do with your life, to turn from victim into survivor. Think of it like this: 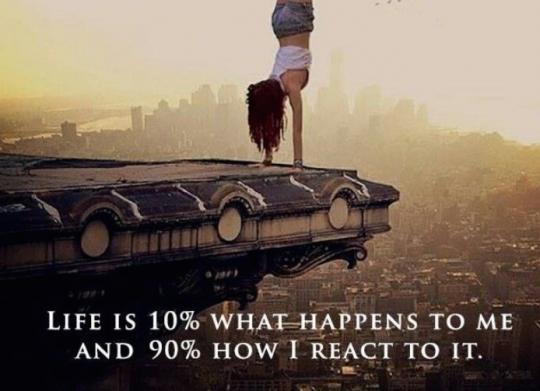 Actually I'm not going to be quite that radical, depending on what has 'happened' the % could be a lot different and really when something has JUST happened that percentage swing is likely the other way around. But slowly and surely through hard work and determination we CAN take back control of our own lives.  Now I am not saying we are all going to be perfect, paragons of virtue that are never afflicted or affected again, what I am saying is when we stop blaming something or someone else for not being who or where we want to be, we are powerful beyond belief.

Of course there are exceptions and if you are terminally ill, or afflicted with daily chronic pain for example, you are not going to be inspired or pleased with a (mostly) able bodied young woman telling you the above - absolutely understood.  But to the other 99% of you reading this you have the power to be what you want to be, do what you want to do and allow yourself the freedom from the bad things in life.  And I have earned my stripes in that regard, all the examples in paragraph three I have experienced and I remember the day my life changed beyond recognition was the day I realised that however many scars I had, however painful life had been, I had the choice of letting it make me or break me and I chose for it to make me.

There will always be hard times, always reasons not to do things, excuses and people to blame (not to mention the government which people love to blame for so many things). Reasons not to move jobs, move house, tell someone you love them, write that book, have that child, start that charity, run that marathon... But the reason TO do it is because you deserve to take responsibility for your own life, take the control away from those things that wrong you and own the power to make it happen.

There is always a choice...

Don't believe me? Look up Henry Fraser on twitter, he'll teach you the above in a much better way than me...