Anyone who reads Mental Healthy on a regular basis will know that we have run story after story fighting the common misconception that those who commit evil acts must be in some way ‘mentally ill’. 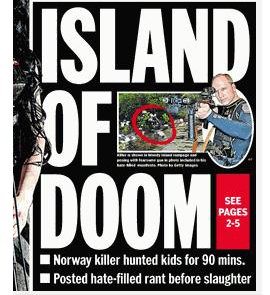 It seems that not a sickening criminal act passes by the press without some media pundit becoming a wannabe psychiatrist, sensationalising the crime with ‘mental’ speculations.

This week (August 2012) the evil acts of Anders Behring Brevik have been shown for what they are – despicable and sickening, straight from the mind of a malicious man that carried out the deeds with prior forethought. This is not only a ruling that should help towards the breakdown of stigma and confusion surrounding mental illness, but also one that will also allow his deeds to be punished accordingly.

I wrote a piece on Anders Breivik, evil and mental illness when the initial hearing tried to determine his state of mind. It was a piece that inflamed some and voiced the opinions of many more. Both sides of the fence agreed the man was evil, but was this associated with mental illness? I very much hope that this ruling, helps separate ‘badness’ and ‘madness’ and goes some way to breaking down media and the public misconception.

I hope also that being punished for the crimes he committed in the criminal justice system, as opposed to the mental health system, means we are a step closer to a justice that will sadly never remove the pain of the crime. After all, so many of us that suffer with mental health conditions (who have never committed acts of evil) are so often denied the help needed due to the lacking of mental health services.

Dr. Simon Wessely, of King’s College London, stated: “Everyone’s first assumption is that Breivik must be insane because he’s done such terrible things, but it doesn’t automatically follow that he must be mad just because what he has done is inexplicable.”

Wessely also said of Breivik’s acts: “It doesn’t tally with the kinds of disorganised crimes usually committed by people with mental health problems.”

While Tad Tietze of the University of New South Wales says: "People imply that mental-health patients are capable of these acts. They don't deserve to be associated with a fascist mass killer."

"We have to name his ideas for what they are," says Tietze.

It is my genuine hope that this is a step towards the separation of evil and mental illness, with media taking note that the two should not be portrayed as hand-in-hand. However, sadly, looking at the amount of coverage this ruling has had, in comparison to the initial ‘psycho’ headlines, I am a little dubious…

Have your say below:

Mental illness has too long

Submitted by Anonymous on Wed, 29/08/2012 - 17:44.
Mental illness has too long been portrayed aS a personality defect or something that makes you a bad person. This is a good call.

Submitted by Anonymous on Wed, 29/08/2012 - 16:31.
There can be no justice I know but at least the families can grieve the acts for what they are and see him punished. There is no happy ending, but at least this outcome proves what you are saying, us 'mentally ill' folk are not bad!

Have your say on this subject below.

Submitted by Anonymous on Thu, 30/08/2012 - 04:39.
"People imply that mental-health patients are capable of these acts. They don't deserve to be associated with a fascist mass killer."* It is advertising for money which drives headlines.* I am pro choice.* If you can't play fair, don't play at all.:) Compassion hurts. When I feel connected to everything, I also feel responsible for everything, and I cannot turn away. - Gary Leach* *other brands are available, thank kindness:)